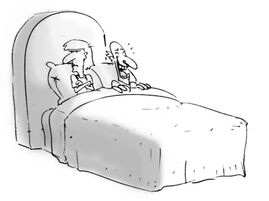 What people are saying:

"'Conversations in Bed' was fabulous. It was very entertaining and we laughed til we cried. Gretchen Suarez-Pena deserves a standing ovation along with all the actors! Can't wait to see what Gretchen does next! - L. in Tampa

"Amazing and funny! Loved it. The cast was wonderful and hilarious. 10/10 recommend." -Z. in Fort Myers

"Didn't know what to expect... Pleasantly surprised it was about what parents deal with in real life, good and bad. Would definitely recommend as it was very relatable to all parents out there." - T. in Tampa

"We attended the premier performance.... We weren't sure what to expect, but were happy to come out and support our friends.... I must say that we were extremely pleasantly surprised with the well-written and well-acted nature of Conversations in Bed. We couldn't have been more pleased. There were brilliant comedic moments and necessary poignant moments as well. You owe it to yourself to go out and support this true work of art -- you will not regret that you did! Even the two 18-year-old young men that were with us enjoyed the play immensely. " - R. in Lakeland

Synopsis: The Ghazi’s, Sanchez’s, Jackson’s and Smith’s are next door neighbors in the suburbs. The audience follows the conversations that each couple has about their lives, families, pasts, futures, and their neighbors. The most comical conversations always seem to happen in bed.

Character Descriptions:
Mr. and Mrs. Ghazi- Sione and Jasmine are newlyweds. They are both from interracial families and are in the "Millennial" generation. Sione is a nerd and Jasmine has a "healthy" sex drive. Originally played by Joe Cruz (Sione) and Phoebe Alach (Jasmine).

Mr. and Mrs. Sanchez- Marcos and Raquel are a Hispanic couple in their early to mid thirties. Raquel is a hot-headed Hispanic woman who is losing her mind taking care of two small kids. Marcos is a stubborn man who is overwhelmed at work and is feeling neglected at home. Originally played by Jorge Diaz (Marcos) and Leslie Paredes Diaz (Raquel).

Mr. and Mrs. Jackson- Ramon and Angela are a black couple, in their mid forties. They have three children. Ramon is always worrying about something. Angela is more laid back. They are both dealing with their own mid-life crisis. Originally played by Tony Murvin (Ramon) and Janet Butts (Angela).

Mr. and Mrs. Smith- Paul and Sherry are a white couple in their mid-sixties. Their oldest son, Greg, is going through an awful divorce, and they often grieve the loss of their daughter, Susan who passed away in an awful car-accident. They reflect on their past life choices and their 40 years of marriage. Originally played by John Durbin (Paul) and Katy Alach (Sherry).